Home > Other Transport > The Benefits of Boats

The Benefits of Boats 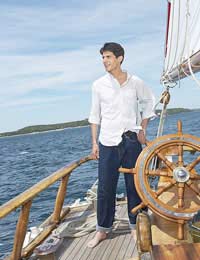 There can be few more relaxing ways to spend a few long idle days of summer than gently floating along a canal – neither many more exhilarating than flying along behind the wind off some beautiful stretch of coastline.

One of the key benefits, whatever your preferred style of boating, is that there are few other means of travel, or forms of recreation, that put you quite so directly in touch with the environment. On the whole, this form of transport is relatively unhurried and generally free of congestion, which inevitably means that you have plenty of time and opportunity to take in the things around you – something which very few people get the routine chance to do.

It is virtually impossible not to be aware of your surroundings on a boat – whether because you are chugging along at little more than walking pace or because the great outdoors is blowing full in your face and doing its best to soak you to the skin. Either way, it is guaranteed to get your attention! Perhaps then it is not really surprising that one of our oldest forms of transport fits so readily in to the modern world’s new-found eco-consciousness.

For sailing yachts, especially small ones without engines, the green-appeal is obvious – if ever there was an example of the most direct use of wind power, then a boat in full sail must be it. Long before the Industrial Revolution sent us on the path to our ever increasing reliance on fossil fuel, empires were built, commodities bought and sold and the far corners of the world were explored by vessels under canvas – and often surprisingly small ones at that.

However, we should not be too hard on those pioneers of British industry – for Britain’s canal network is very largely their legacy, having originally been built around 200 years ago to transport raw materials and finished items to and from the new factories that sprung up. Their need for commercial transport – then chiefly pulled along by horse-power – bequeathed an extensive series of interconnecting water-ways to posterity and enticed many new generations of boaters onto the water. Today, the canals host more boats than ever before. Often heavy use almost invariably seems to go hand-in-hand with a gradual slide into environmental degradation, but fortunately this potential problem has been well addressed ahead of time, principally by the boating community itself.

Many of the crafts have diesel engines – with all of the associated environmental problems that this entails, but a variety of projects have sought to turn this particular vice into a virtue and ultimately may influence fuel use beyond the narrow confines of the towpath. Along with lubricants made from vegetable oils, bio-diesel has been gradually gaining favour with many boat owners. A clean-burning, carbon-neutral alternative to traditional fuel, bio-diesel produces significantly reduced emissions, gives a smoother ride and is said to cut long-term engine wear by up to half. With the EU having recently set a target for bio-fuel to make up at least 10 per cent of the fuel driving European transport by 2020, the growing use of bio-diesel for boats may well ultimately hold the key to the wider acceptance – and availability – of this renewable fuel for use on British roads too.

Boating brings environmental fringe benefits too. Opening up and maintaining canals and rivers for leisure and tourist boats has improved many stretches of long-neglected and deteriorating waterways, providing valuable habitats in areas otherwise largely impoverished of wildlife. Coastal waters too have benefited from the continued popularity of boating and in areas which particularly promote it as a holiday activity; the growth of new marinas has often been quite deliberately balanced by the provision of environmental stewardship schemes.

Today, irrespective of which stretch of water you choose, the opportunities for wildlife watching are unrivalled. Canals generally run through countryside which is far from the nearest main road, effectively carving a narrow nature reserve for hundreds of miles. Adding to this raised sense of environmental awareness, British Waterways, the body responsible for the maintenance of most of the UK’s canal system, have annual surveys – making all observations of real value in long term conservation planning. In the same vein, an environmental awareness initiative – in the form of “The Green Blue” – has been established by the British Marine Federation and the Royal Yachting Association to help salt-water sailors reduce the impact of their boating too.

Perhaps one of boating’s biggest plus-points is that it is so widely accessible. In one form or another, from the cool waters of Britain to the warmth of Greece and beyond, just about anyone can sample the benefits of boats.