Home > Other Transport > Tibet by Train 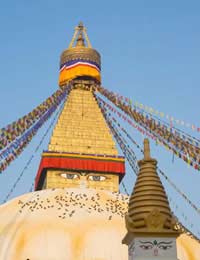 A land of gold-topped temples and magnificent monasteries it is almost impossible to speak of Tibet without falling into the cliché of describing it as the “world’s remotest destination.” However, like so many stereotypes, there is more than a little basis in truth – and for reasons of both geography and politics, Tibet can be a difficult place to visit. Until very recently there were only two ways for the tourist to get to the region – either taking one of the limited number of flights or braving the arduous Qingzang Highway, built back in the 1950s. The coming of the Qinghai-Tibet railway – the world’s highest train line, at an altitude of around 15,000 feet – offers a new and very different way to travel to the roof of the world.

Riding on the Roof of the World

Running through some of the planet’s harshest natural conditions for over 1200 miles – from the provincial capital of Xining to the “Sunlight City” of Lhasa – the new railway holds an impressive array of world records. As befits the world’s most elevated line, it also boasts the highest railway station, is the longest plateau railway in the world and cuts through the highest tunnel. Half of the track between Golmud and Lhasa was laid on semi-permanent permafrost, where winter temperatures plummet to minus 35 degrees Celsius, while summers of 30-plus degrees thaw the upper layers to barely stable mud. The technical challenges of building the railway at all were enormous – and some very clever solutions were brought into play, including using liquid nitrogen to keep the ground frozen and providing supplementary oxygen for the workforce. At these altitudes, the air holds around 40 per cent less oxygen than at sea level.

The thin air makes being a passenger on this train a particular and unique experience, if only because before being let onboard, the traveller has to complete a special health registration card, which includes signing a high-altitude travel disclaimer. The carriages themselves – there are 308 standard and 53 special tourist cars – look pretty normal from the outside but beneath the façade lays a host of features especially designed to meet the challenges of their route. The windows, for example, are made from UV-filtering glass, the carriages are sealed and there is a supplementary oxygen supply for each passenger.

Never-the-less, the trip is not without its risks; in August 2006 a 75-year-old man with a history of heart problems became the first passenger to die on the route. He was joined three months later by a woman who tragically expired giving birth in the train’s lavatory. Clearly, anyone planning to ride on the world’s highest railway would be well advised to seek medical advice first.

The political situation in the region is a difficult one and inevitably leaves Tibet a troubled land. While the new railway has been in part built to boost tourism, there are many who question whether we should visit Tibet at all, since to do so legitimises what many see as an immoral annexation and lines the coffers of Beijing rather than truly benefiting the local economy. There is no easy answer and the longer you research the issues and the more you discover, the more likely you are to find your ideas change and develop. For those of us who, despite everything, find the notion of visiting this historic and beautiful land simply too beguiling to set aside, there is one pretty powerful salve for our consciences. His Holiness the Dalai Lama – exiled spiritual leader of this ancient and mystical country – believes that it is essential that foreign tourists should see his homeland and then let the world know what they have seen.From a practical point of view, for those who do decide to visit, it is important to remember that the regulations governing entrance are subject to change – often quite abruptly. Although there have been times when the independent traveller was welcome in many parts of the region, travelling as part of an organised party is often the simplest approach.

Although the Qinghai-Tibet railway stands as the culmination of a long-held Chinese dream of connecting China to Tibet – and offers a magnificent way in to this magical land – many have seen it as a way to speed up immigration and accelerate the dilution of Tibetan culture. Perhaps the only sensible approach is to research the whole topic carefully before you decide whether or not to go – and remember the Dalai Lama’s words. With foreign journalists effectively banned from the region, the responsible tourist can play a very important role.