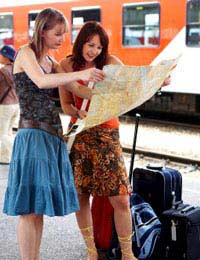 Although train travel is widely held up as the greenest form of mass transportation when it comes to leaving these shores, the easy convenience of the plane often wins out, no matter how strong our eco-principles. However, all this could soon be set to change with the recent launch of regular passenger services over the new “High Speed 1” line – set to slash journey times from London to Paris, Brussels and Lille. Dubbed “Britain's entry into the European high-speed rail club” the new rail link – opened in November 2007 – will allow trains to become a serious rival to flying for many more travellers.

For one thing, it will cut around 20 minutes off the trip – making the journey from London to Paris last 2 hours 15 minutes, London-Brussels 1 hour 51 minutes and London-Lille slightly over an hour and a quarter. However, perhaps the biggest change is Eurostar’s move from Waterloo to the recently revamped St Pancras station, which will open up the train option to many more people outside of London and the south-east. Six Underground lines serve the station and seven rail companies run trains out of St Pancras International and the nearby stations of King’s Cross and Euston, making it easier to connect to the rest of the UK. According to the operators, even for those travelling from the north of England, the service should match air travel in terms of total journey time – once you take into account the lengthy check-in and transfers to and from airports.

The trains themselves are amazing technical achievements – able to cope with the demands of the different power systems in the UK and mainland Europe, run under four different signalling systems and are equipped with three separate braking systems. With the completion of High Speed 1, up to eight per hour will be able to travel in each direction from London to mainland Europe, at speeds up to 186 mph. Small wonder that many believe Eurostar are poised to give airlines a run for their money!

European rail travel seems to have some very interesting developments on the horizon. There has been some suggestion of a possible High Speed 2 line to link St Pancras to Birmingham – with further extensions to the north and west being discussed – to open up Euro-rail to an even larger section of the population. If it does come off, it will not be cheap – initial estimates put it at around £10 billion – but it would certainly alter the current balance between regional airports and the railway network as never before.

Nor is Britain alone in its efforts to make rail travel in and around Europe simpler and more convenient. The recently formed alliance of nine high-speed train companies – Railteam – was created to compete directly with airlines and promises to change our view of railways out of all recognition. With their revolutionary approach to ticketing arrangements – allowing through ticketing just as the airlines do currently – coupled with synchronised timetables and reciprocal recognition of frequent traveller schemes, rail travel will be well equipped to become a serious rival to flying.

The completion of High Speed 1 comes nearly 180 years after Stephenson’s Rocket won the Rainhill Trials and led to the birth of the whole rail industry. It is tempting to hope that the developments that will follow from this latest piece of railway history will ultimately prove just as important – although this time for environmental, rather than economic, reasons!