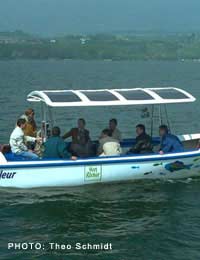 As a means of transport, boating can lay claim to some impressive green credentials and as an eco-friendly holiday to make you really slow down and re-think your relationship with wind and weather, it is up there with the best. However, there is clearly little point in proclaiming the benefits if you end up contributing significant environmental harm along the way.

Not so very many years ago, the toilet facilities on many boats, for instance, flushed directly into the waterway. This practice has been stopped – and water quality is more protected as a result – but sanitary arrangements aside, there is still the potential for pollution. Fortunately a number of initiatives and simple, practical steps are helping to make this risk very much smaller.

As you might expect, once again petrochemical products are cast as one of the villains of the piece – spillages of diesel and lubricating oils posing serious dangers to aquatic life. Lubricants made from vegetable oils are being promoted across the EU and the newly announced target for bio-fuel to make up at least 10 per cent of the fuel used by European transport by 2020, will further bolster the growing acceptance of bio-diesel.

A clean-burning, carbon-neutral alternative, bio-diesel produces significantly reduced emissions, is faster starting, smoother in use and is said to cut long-term engine wear in half. Despite these major benefits, bio-diesel spills are still potentially harmful to wildlife, so the usual precautions around filling up still need to be followed. However, if the worst does happen, all is not entirely lost; studies have found that bio-diesel degrades in about a month – about twice as quickly as the conventional type.

The best way to avoid any of these problems is, of course, not to use a conventional engine at all and a new breed has begun to make its presence felt alongside canoes, rowing-boats and small sailing craft in the ranks of the diesel-free – electric powered boats. These boats have great advantages for inland waterways since their lack of exhaust and imperceptible noise reduces their environmental impact enormously. Although charging stations are not currently widespread, the Norfolk Broads Authority have set up a number on a pay-as-you-go card system and in other areas, the use of on-board solar panels can help to overcome the problem. In addition to purpose-built electric models, conversions are also available for traditional designs also.

Keeping your boat clean and fuel efficient can also be a source of pollution to the waterways, though there are ways to minimise these risks too. The most environmentally friendly approach to boat cleaning relies on ‘elbow-grease’ rather than harsh detergents or cleaners – but even the most energetic wielder of the mop and scrubbing brush will probably need a little extra help from time to time. Taking the time to read the label and research your purchase should help you source products which are as little damaging as possible. In general terms this means avoiding bleaches, detergents and soaps that contain chlorine, phosphates or metals, and switching to water-based, rather than solvent-based, cleaning agents. However eco-friendly your choice, in use, it is important to ensure that the run off from all your cleaning activity does not simply sluice directly into the waterway itself.

Anti-fouling paints are more problematic. Widely used by boaters to prevent aquatic life from growing on the hull – which increases fuel consumption – these paints often contain toxic and carcinogenic chemicals. Tri-butyl tin (TBT) – a particularly harmful ingredient – was banned in the late eighties, but none of the anti-fouling agents in use can truly be described as safe or harmless to the environment, though some are less harmful than others.

In general, water-based paints are preferable to solvent ones and hull scrubbing kept to a minimum, to avoid rubbing off large amounts of potentially polluting material. To get around the problem altogether, some owners have found that using ordinary hull paint and then applying a coat of non-toxic wax to the bottoms of their boats can be a very effective alternative.

There are other areas too where the pollution potential can be cut – waste management being one of the most important. Simply being tidy with your waste – and reducing the amount of packaging you take with you in the first place – can make a huge difference, both visually and to the environment. If there is anywhere where the “reduce, reuse, recycle” mantra is important, it must be on board a boat and nowhere is responsible handling of any waste marked “hazardous” more vital then on a waterway.

For eco-conscious boaters wanting to green-up their act, help is available from a variety of sources, including British Waterways and “The Green Blue” – a joint initiative set up by the British Marine Federation and the Royal Yachting Association. Whatever your level of interest or proficiency, it does not take much to ensure that messing about in boats remains low-impact fun.