Home > Holidays & Tourism > Choose the Best Method for Your Journey

Choose the Best Method for Your Journey 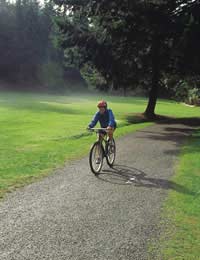 Choosing the right mode of transport for a journey chiefly depends on where you are going and why – and it is import to remember that for some trips there simply is no choice. If you need to get to Australia and do not have a few months to spare, then you are hardly going to be looking around for an alternative to flying! However, when the solution is not so self-selecting and there is a genuine choice, it is not always easy to be sure which of the possible options is the most eco-friendly and it can feel like comparing apples with oranges.

Although it is often difficult to come up with a clear winner – which is “best” often depends heavily on the context of the trip – fortunately, there are a few general points which can help. Human power – walking or cycling – trumps everything, though it may surprise you to know that in terms of energy per person per mile, the bicycle is the more efficient method.

When it comes to mechanical power, occupancy of the vehicle is one of the single most important factors in determining how energy efficient it is per person – full vehicles always doing far better than part-empty ones. That said, in general trams, trains and buses are the most efficient, better than motorcycles, which are slightly more efficient than cars and bottom of the list comes the aeroplane. However, measured on the basis of the energy used per person per mile, a car with only the driver in it comes out worse than flying in a fully laden plane.

Cars really are a bad choice for short journeys – cold engines produce up to 60 per cent more fumes than warm ones and it takes about five miles before catalytic converters begin to work. If your trip involves this kind of distance, then walking, cycling or using public transport would involve far less harm to the environment.

It has been estimated that something in the region of 75 per cent of all journeys in the UK are short enough to make cycling a realistic option and in many of our congested cities, the bicycle can often be the fastest way to get around. It does have its limitations of course, in distance terms and carrying capacity – and only the hardened enthusiast would pretend that the bike was ideal for British winters!

A full train is at least twice as energy efficient – and less polluting – than a full car, making it a very eco-friendly travel option, particularly for long distances. However, though electric trains obviously have no direct carbon emissions, the bulk of the electricity that powers them is derived from fossil fuels – coal and gas – so they are not entirely squeaky clean, though they are undoubtedly preferable to the driver-only-occupancy of so many car journeys.

If the car remains the only option available – perhaps because the public transport network does not serve your area or destination or because the timings do not fit – then all is not lost. There are a number of practical things you can do to reduce your personal carbon imprint – avoiding fast acceleration/heavy breaking, making sure your car is properly tuned and the tyres are at the right pressure will all improve fuel economy.

For journeys overseas, the train is something of an underused option – though the Eurostar service to Paris and Brussels has helped – but it is not terribly convenient if you live far from the ports of the south-east. Seldom mentioned in discussions of carbon and energy efficiency, all forms of water travel are low-impact – especially sailing vessels – and although it is slow and the port may be some distance away, going by sea is always worth considering if at all possible.

Choosing the best method can be difficult, particularly since much of the current debate tends to polarise and oversimplify the issue – this way is bad, but that one is good. In many ways, there is no “best” form of transport, just the one which is most appropriate for the trip – and this need not always be the same solution, even if you make the same journey many times, as circumstances change. Perhaps too, we need to get away from the whole idea of single ideal method and look at combining different options to make best use of each. While the oft-promised “joined-up” transport system remains elusive at a national level, as individuals we can adopt our own integrated approach, moving seamlessly from bicycle to bus or from car to train for different parts of the journey. The idea of using a mix of various forms of transport in a way that keeps the best aspects– and minimises the harm – of each has an obvious appeal, but while even this will not be the “best” for every journey, it is a good starting point to make the final choice.

Ideas for a European Cycling Holiday

Try Out a Yurt Holiday