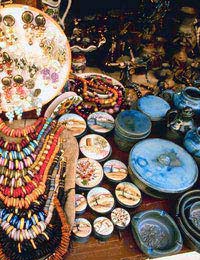 Coming home with exciting and unusual souvenirs for friends and family, as well as yourself, as a permanent reminder of your trip is one of the joys of travel. However while the environmentally conscious traveller will, of course, be looking to buy locally produced items in preference to imported ones – what are you really bringing back with you?

While things made out of natural materials by local artisans can be a very attractive option, they can sometimes lead you into trouble, since the trade in a number of such materials is illegal under international law. Unfortunately, even though something may be on open sale in some parts of the world does not stop it falling into the prohibited category – making it very difficult for unsuspecting tourists to know that they are actually doing anything wrong. Never the less, arriving back in the UK with some kind of product in your luggage could be a recipe for a hefty fine or even a stay in jail. So, how can you be sure that your souvenirs are really as eco-friendly as you would want them to be and – more to the point – how can you avoid bringing back those which certainly are not?

Some things are fairly obvious, such as items made from unsustainable tropical hardwoods or genuine ancient artefacts. However, when it comes to endangered species – with more than 800 species of plants and animals banned from international trade and the sale of over 30,000 strictly controlled – it can be much more difficult to get it right.

The United Nations Convention on International Trade in Endangered Species of Fauna and Flora (CITES) is the principal piece of legislation and covers 5,000 species of animals and 25,000 plants including both dead specimens and any parts derived from them. Many souvenirs made from a variety of materials – including certain kinds of cat fur, ivory, tortoiseshell and various reptile skins – cannot be legally imported into he UK, while some of the kinds that are allowed require permits to be obtained prior to departure.

Various kinds of cats’ pelts – including tiger skins and “spotted” furs, such as leopard and jaguar – are on the prohibited lists. Although it has become largely unacceptable to use such items as fashion wear in the West, it is still not uncommon for handbags and coats to be offered for sale in some tourist venues.

Ivory and other elephant products are also not uncommon in souvenir shops in many parts of Africa and Asia – even at some airports – but only exports from Zimbabwe are really allowed and even then the limited amounts permitted are subject to close control. If you are visiting Zimbabwe, checking the current situation with the Department for Environment, Food and Rural Affairs (DEFRA) is an absolute must before you buy anything; anywhere else and the message is simple – don’t! As the International Fund for Animal Welfare (IFAW) put it – an elephant can be shot a thousand times with a camera but only once with a bullet.

While most people are aware of the situation with elephants and big cats and would not dream of buying them as keep-sakes, a number of other endangered species are less well known as potential souvenirs – creatures such as turtles, crocodiles, snakes and large lizards. Turtles were swimming the earth’s oceans before the dinosaurs appeared and they managed to survive the mass extinction that so thoroughly did away with their cousins. Beautiful though presents such as combs, sunglasses or jewellery made from their shells undoubtedly are, buying them does little to help this remarkable survival story continue. The same applies to some of their other close relatives – the importation of many reptile skins is covered by strict European legislation, which bans belts, shoes and other leather goods made from a number of the world’s species. Some types of coral and a number of seashells are also prohibited, along with many kinds of rare plants – especially cacti and orchids.

Souvenir hunting can be great fun, especially if you enjoy a good haggle in the local market as you shop for your bargain and it would be a shame to deny yourself that pleasure. A little research beforehand can be an invaluable aid to recognising what not to buy – even if only to avoid the more obvious or most likely culprits. However, given the enormous difficulty even the experts sometimes face deciding whether a particular trinket is made from a protected species, perhaps it is simplest to just avoid wildlife-derived souvenirs altogether. After all, with the wealth of other souvenirs typically on offer – clothes, fabrics, pottery and jewellery, for instance – you are unlikely to be short on choice.

Ideas for a European Cycling Holiday

Try Out a Yurt Holiday