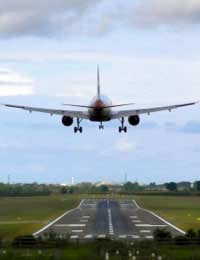 Although the whole issue of air travel and the environment has become the subject of enormous scrutiny recently, there are times when flying is simply the only practical way to travel. Even though much of the criticism levelled at aviation applies fairly generally to the industry as a whole, all airlines are not the same and in certain aspects some are more eco-friendly than others. While it is not always easy or, indeed, possible to pick and choose your carrier, sometimes the opportunity will arise for the eco-friendly traveller to make that choice – but how do you go about making that decision? Fortunately, there are a few key areas to consider which could make a big difference in helping you arrive at your selection.

Trying to find out about the company’s own environmental stance is probably the best first step. You should be looking for a formal written policy to cover a whole range of important issues, including what steps they take to minimise their own impact, how they approach purchasing, their attitude to waste, how much they recycle and do they assist any conservation projects.

Checking out your intended airline is not always easy. With some, an amazing amount of information is freely available either from their website or in hard copy, while others can be surprisingly coy about letting you in on the secret. Claiming to have an environmental policy is one thing, but the simple rule of thumb is, if it is not in writing – or they are not prepared to let you have a copy – then they are probably not the company for you! Even for those who do have a written policy; it is helpful to know how they measure its effectiveness, as ill-defined goals without any form of verification are of limited use.

The airline’s fleet of aircrafts has an enormous influence on their overall environmental impact and both the type and age of the aeroplanes matter. The amount of carbon released by any aircraft is directly related to the amount of fuel it burns – slightly over three grams of CO2 being produced for every one gram of aviation fuel used – so obviously the plane’s fuel efficiency is important. However, it is not just a simple question of miles per gallon – a number of other factors play their part and high amongst these comes the fuel consumption per passenger. The number of seats and the percentage of fully occupied aircrafts makes an enormous difference to the overall efficiency of the flight – and by implication, the airline too.

When the same aircrafts are flown over different routes, things can become far from straightforward and comparisons much more difficult to make. On shorter routes, for instance, the Boeing 737-800 is a very efficient aircraft, but on long-haul flights, it loses out to its heavier rival, the Airbus 320.

In addition, the age of the aircraft also plays a part, since in general, older aircrafts are less fuel efficient than their modern counterparts. Current 747s, for example, produce 35kg of CO2 per km – making them 12.5 per cent less polluting than those manufactured in the 1990s; today’s Cessna 525 low thrust jets now use only 1 kg of fuel per km, representing 40 per cent less CO2 emissions than ten years ago. All modern aircrafts are equipped with sophisticated flight management computers to optimise fuel consumption, making maximising passenger numbers and reducing empty seats significant factors in fuel efficiency.

The airports which a given airline use might also be a consideration. Many have their own environmental approach and, as with the airlines themselves, the more readily they are prepared to share that with you, the more likely they are to be really trying to do their best. Many airports have taken positive steps to minimise their impact ranging from monitoring air emissions to establishing on-site recycling facilities. Although much of the debate on the ecological impact of aviation has tended to focus on aircrafts and the airlines themselves, airports can play a significant role in reducing the overall impact of air travel. Obviously, for many venues, there may well be little choice of airport; for those where alternatives are available, the fact that an airline uses the most eco-friendly may well be important in making the overall decision.

While flying as a mode of transport has probably never before been subject to such widespread criticism, its unique role in modern life means that its wholesale abandonment is extremely unlikely. Given that we are not going to renounce aviation altogether, then we need to be careful which airline we use – and that is a choice which we should make wisely.