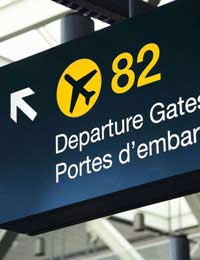 No matter how we choose to travel there is no getting away from the simple fact that some level of pollution is inevitable. However, while a pony and trap means a few kilos of horse manure and a bicycle a little extra carbon dioxide (CO2) will be exhaled, the potential impact of air travel is much greater, particularly since this mode of transport accounts for so many tourist journeys.

As air travel continues to grow, there are two areas which potentially lead to increased environmental pollution. Extra passengers bring added flights, which in turn means more fuel usage – and additional carbon – together with all the necessary requirements to accommodate them. More travellers also often means airport expansions and additional runways, a greater number of vehicle movements – and larger car parks – as more passengers pass through the terminals and escalating demands on water, sewage treatment and waste services. Important though these ancillary issues are – not to mention the whole subject of noise pollution – it is the carbon question which has become firmly centre-stage.

With carbon emissions the watchword for the age and man-made climate change firmly established as one of the hottest topics of our time, how does air travel really fare in the pollution stakes?

Aviation fuel, like petrol, is made from oil, which was itself formed over millions of years – hence the description of these products as “fossil fuels” – and therein lies the problem. Burning any fossil fuel releases the “old” carbon into the atmosphere which had been bound up in material itself for millennia, enriching “today’s” air from “yesterday’s” store. While this is true of all fossil fuels – coal, oil, natural gas and any form of travel which uses them, be it steam train or car – flying is commonly seen as making a particularly significant contribution. So would the world really become a low-carbon utopia if we all simply gave up the joys of long haul holidays?

There are many figures bandied about regarding the amount of CO2 produced per flying mile and the likely impact this will have on the planet. As a good working guide, around 1 tonne of CO2 is produced for every 4,000 miles flown by an air traveller – which means the average London Heathrow to New York JFK flight makes you responsible for adding a little over a tonne-and-a-half. While flying is undoubtedly the fastest growing carbon contributor, it certainly is not currently the largest, accounting for only 5.5 per cent of the UK’s total CO2 emissions. To put this in perspective, domestic households and road transport are each responsible for around 20 per cent apiece.

However, as with so many things in the global warming debate, it is not quite this straight-forward. The contribution of air travel is growing very swiftly and will soon account for a much larger proportion of the total if the number of flights made continues to rise at this rate. Moreover, carbon released at 30,000 feet is more damaging than the same amount at ground level and in addition, aeroplanes produce nitrogen oxides and water vapour – also greenhouse gases – making the flight’s global warming effect three times greater than the CO2 alone. To return to our London to New York example, one tree offsets the carbon dioxide, while two more will account for the effects of the other two gases.

Reducing the environmental cost of flying is not solely about carbon, of course. Aside of the effects of the fuel burnt and the age-old issue of noise, air travel requires the use of other potentially harmful chemicals and produces waste. Keeping aircraft wings free of ice, for instance, calls for the use of glycol and potassium acetate – though the good news is that increasing numbers of airports are installing “green” systems to treat the run-off. To combat the amount of food and packaging waste generated, many airlines have taken steps to recycle aluminium cans and much of the catering equipment is returned to the outside caterers for recycling or reuse where appropriate.

In addition, many operators have embraced the “paper-less” idea – electronic tickets replacing their printed counterparts and computerisation being used to reduce the need for much of the actual paperwork which was previously routinely produced.

Although air transport is the fastest growing contributor of greenhouse gases and if we all stopped flying altogether emissions would unquestionably fall, aviation and long-haul flights do not deserve to be demonised in the way they often are whenever the issue is raised. Though the answer to the question “Does Air Travel Pollute?” has to be a yes, so do most of the things we do in our lives, in one way or another, so perhaps it is better to consider instead the overall impact of our flight and the trip. If offsetting the harm our holidays do is to mean anything, then the positive effects they can have must also be taken into account. Without the tourist draw – and revenue – many animals, such as the elephant or rhino, for example, would almost certainly be teetering on the brink of extinction today; an elephant can only contribute once to the ivory trade but be photographed a thousand times by eco-tourists.