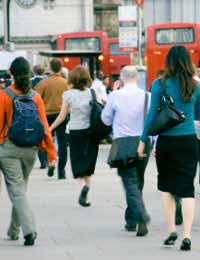 We all know the arguments for ditching the car and walking, cycling or using public transport, but for many of us – however strong our green consciences – it simply is not a realistic option. When the distances involved or the lack of bus or train provision makes the car the only solution, then there are ways to make this much maligned form of transport less environmentally damaging. The emphasis has often been on either driving in a more energy-efficient way to minimise petrol use – and emissions – or changing fuels or your type of car to more eco-friendly forms. Often overlooked, car pooling – also known as lift-, ride- or car-sharing – offers a flexible method of travel which can dovetail into everyday life while reducing individual carbon footprints.

According to the National Statistics Office, if every person who regularly drives to work alone simply gave another similar driver a lift – even once a week – the number of commuting cars would fall by around 15 per cent. The advantages of car pooling are not just limited to the demands of daily work – trips to particular venues or events also fit well into the same ethos. However, because of the perceived inconvenience of car pooling and despite its obvious environmental benefits, it is often largely ignored in our thrust towards carbon neutrality.

Environmentally, the nearer to capacity a vehicle is driven, the more fuel efficient per person it becomes and by the same token, the smaller the individual share of the pollution generated. While the additional weight of passengers in a full “car-pooled” car does mean that more petrol will be burnt, the fact that their own vehicles have been left back in the garage offsets this slightly higher consumption several times over. In addition to the emissions, fewer cars means less noise pollution, reduced congestion and should help to improve journey times.

From the individual’s point of view, the trip can offer a chance to take a break from the inevitable stresses of driving. Formal car pooling schemes also help to defray some of the expense of running a car – which motoring organisations estimate at around 25p per mile for a small hatchback – with passengers contributing to the petrol and running costs.

For the employer, too, there are benefits to encouraging car pooling amongst staff. On a practical level, it reduces competition for car parking spaces, while at a corporate one; it makes a clear and positive statement of environmental concern. In some areas, the car pool might even be expanded to cover two or more organisations – helpful if a number of different employers occupy an out of town Business Park, for instance.

One of the really positive features of the whole idea of car pooling is that it can be as structured or as informal as the participants involved wish. At one end of the scale, it can be as simple as a “Lift Wanted” advert in the newsagent’s window, or a formal scheme administered by any of the facilitator companies which have arisen in response to the growing popularity of the car pool concept. Formal car pooling is still in its infancy in the UK, but in other countries the idea has certainly come of age, with town councils in Sweden themselves owning 30,000 pool cars and extensive freeway lanes reserved for “high-occupancy vehicles” in the US. Britain is beginning to catch up though, with the advent of a small number of on-line suppliers of booking and administration services for car pool operators, such as National CarShare UK and FreeWheelers. These providers offer comprehensive matching service, to ensure that the needs and privacy of both drivers and passengers are met, avoiding any potential offence or awkwardness.

If the will is there, almost anyone can car pool – any two people needing to travel from the same area, to the same area at the same time can share, whether or not they work for the same company. It can also work for shift workers – there are only slightly fewer people commuting outside of the traditional rush hour as travel during it – and scheme providers can arrange lifts with different drivers to cover going in to work and returning if shift patterns are awkward.

With escalating fuel and associated costs, increased congestion and a growing general concern over the environmental damage of road transport, if the Swedish model is anything to go by, car pooling seems poised to become a major feature of British commuting in the years ahead.