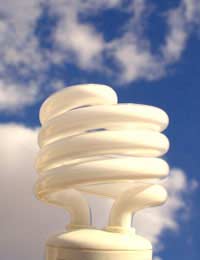 However responsible we try to be about our travel, the fact remains that unless we all abandon going anywhere beyond the range of foot or pedal power, it is impossible to escape causing some level of environmental impact.

Of course there are many ways in which we can green-up our transport, but for all of our car-pooling, train usage and carbon-offsetting, our travel still remains a net contributor to the global carbon balance. Of course this is not to say that these steps are not worthwhile, but it does mean that if we are serious about moving towards carbon neutral travel – without actually giving up going anywhere – then we need to look elsewhere in our lives to make up the difference. In effect, we need to run our own mini carbon-scheme for ourselves and the good news is that it can be surprisingly simple to do.

Improving energy efficiency around the home can make a significant difference to both purse and planet and best of all, many of the changes necessary are small, relatively inexpensive and can be implemented one by one. Most of them are very well known. The benefits of loft insulation, for example, are widely understood and with up to 25 per cent of the heat in a poorly insulated house being lost through the roof, the case for the economic and environmental necessity of a good thick layer is pretty clear. For a really green way to do this there is Thermafleece – relatively new to the UK and manufactured by Second Nature from sheep’s wool.

Central heating may be convenient, but only if it is used effectively, which means that you need to be able to control the temperature of each room separately. Installing individual room thermostatic radiator valves – and setting them sensibly – can make a huge difference to both the cost of heating your home and your overall carbon dependency. Replacing an ageing boiler is also a good plan – modern ones are far more efficient. Best of the lot are condensing boilers which convert nearly 90 per cent of the fuel into heat while high-efficiency, fan-assisted boilers or combi-boilers also offer significant reductions in energy use.

Energy efficient light bulbs can help too and with the EU leaders having recently agreed to phase out conventional incandescent bulbs by 2009, we will all be using them eventually. Although critics have pointed out that the claims made for some bulbs – especially over their length of life – can often be misleading, their reduced energy usage is unquestioned. The main problem with them remains, however, largely aesthetic – most of the commonly available types are not particularly pleasing to the eye. In an effort to address this problem, B&Q has recently announced a range of around 100 low-energy designer bulbs, together with a variety of new eco-friendly lighting options including light-emitting diodes (LEDs) and an energy-efficient chandelier.

The ultimate solution to reducing your domestic fossil fuel usage is of course, to avoid it altogether – either switching to a green supplier, or installing your own renewable system, using technologies such as photovoltaic cells or wind turbines to make your own electricity. This is a radical departure for most of us – and needs careful thought and probably Planning Permission too – but a variety of companies, including B&Q once again – are beginning to make this much more of a mainstream possibility.

Waste Not, Want Not

We all know about recycling – though the benefits of some council’s approach can be a bit dubious, if they insist on hauling lorry-loads of materials hundreds of miles, burning untold gallons of diesel in the process. However, a different aspect of household waste is often overlooked, leaving it the forgotten element in carbon neutrality. When materials such as food or garden waste decompose in a typical landfill, they generate methane – a gas around 30 times more damaging as a greenhouse effect than carbon dioxide.

Although modern landfill sites have systems to capture this and burn it, even if they managed to collect 100 per cent of the methane produced, they would still be releasing tonnes of carbon dioxide into the atmosphere as a result. The solution is simple – at least if you have a garden. Buying a compost bin or wormery not only provides a good source of material for your plants, but also reduces your overall household emissions. Growing plants – all of which are carbon-capturing – in material created from your own carbon-releasing waste is a neat way to close the circle.

Formal carbon-offsetting schemes work on the principle of removing a tonne of CO2 for every tonne we produce but it is an indirect process – “our” carbon is still out there. In contrast, by adopting a more direct approach in our own lives, each of us becomes responsible for our own actions – and ultimately masters of our own destiny.